The Somaliland National Youth Day – Feb 20, previously known as UFFO Day, originated from the historical Stone-throwing events (Dhagaxtuur) against the regime Said Barre) that took place in 1982 and in honoring youth from the past, present and the future, Former President HE.Ahmed Mohamed Mohamoud (Silanyo) recognized as the Somaliland National Youth Day through the decree with reference number JSL/M/XERM/249-4570/022017.

The Chairman of Somaliland National youth organization (SONYO) has made the opening and welcoming remarks to the participants.  Mr.Salah firstly  briefed the Somaliland Youth Development Fund.

“For the last year we were working the structure of the Somaliland Youth Fund which Somaliland Government funded for startup grant.” SONYO Chairperson Mr. Abdiaziz Sa’eed Salah 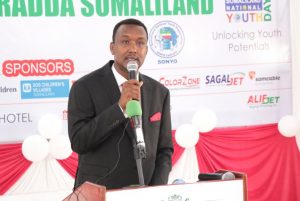 “Somaliland Youth Development Fund will have a managing committee. We plan to start operations with a fund of $2 Million Dollars.” Mr. Abdiaziz Sa’eed Salah, Chairman,

Afterwards, Vice President Abdirahman Abdilahi Ismail has delivered the keynote speech in the opening ceremony. Starting with congratulations to the Somaliland National Youth Organization (SONYO Umbrella) for organizing the event. Vice President continued to stress the importance of Youth and Promised government is committed to support.

“You must use your time wisely and be ready for work.” “We need to fight bad habits like tribalism and drugs together.”said Abdirahman Abdilahi Seylici, The Vice President of Somaliland 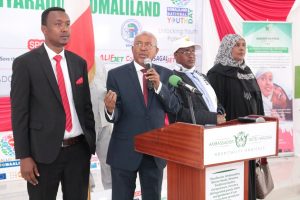 “The government is committed to support and opportunities availabe for youth.” said Somaliland Vice President

Meanwhile,The Head of British FCO in Somaliland Stuart Brown attends the National youth day has promised his government ready to partcipate the Somaliland 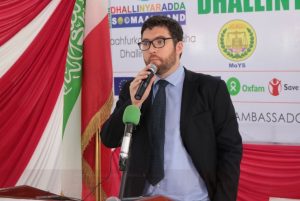 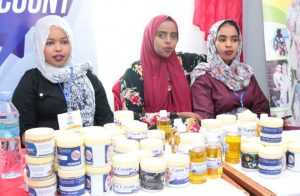 The Somaliland Youths estimated about 70%, makes the largest population (roughly two-thirds) in Somaliland and yet surrounded by so many challenges such as high rates of illiteracy, limited access to formal education and technical skills, poverty, unemployment leading to dependency on external sources such as remittances, lack of youth-friendly centers; effects of conflict and gender-based violence; and alienation from positive interactions with adults and the rest of society. And these problems worsen the youth-related issues being a cross cutting in nature, the lack of coordination of intervention efforts, inadequate youth investment and uneven youth-related resource distributions existing in the region either been from the public or other key international youth stakeholders. 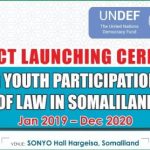 SONYO launches a new project on enhancing Youth participation and the rule of law in Somaliland.